The Raspberry Pi camera module is a great addition to your Pi. It will allow you to develop more advanced applications with vision. And if you thought that taking pictures with the Pi camera would be hard, here you’ll see that it’s just the opposite.

>> Video version of the tutorial <<

UPDATE: This tutorial only works for Raspberry Pi OS Buster and before. The new Raspberry Pi OS (Bullseye) does not support the “raspistill” command, you have to replace it by “libcamera-still”.

And now below is the text version.

Setup and enable the Pi camera

First, make sure to shutdown and power off your Raspberry Pi.

Localize the camera port (don’t confuse it with the display port which has a similar connector). The camera port is between the HDMIs ports and the jack port. You can see “CAMERA” written next to it.

Once you’ve located the camera port, now make sure to plug the connector in the right way. The blue part should face the jack and USB ports.

Now, power on your Raspberry Pi. To open the settings for the Pi camera, click on the Raspberry Pi icon > “Preferences” > “Raspberry Pi Configuration”. 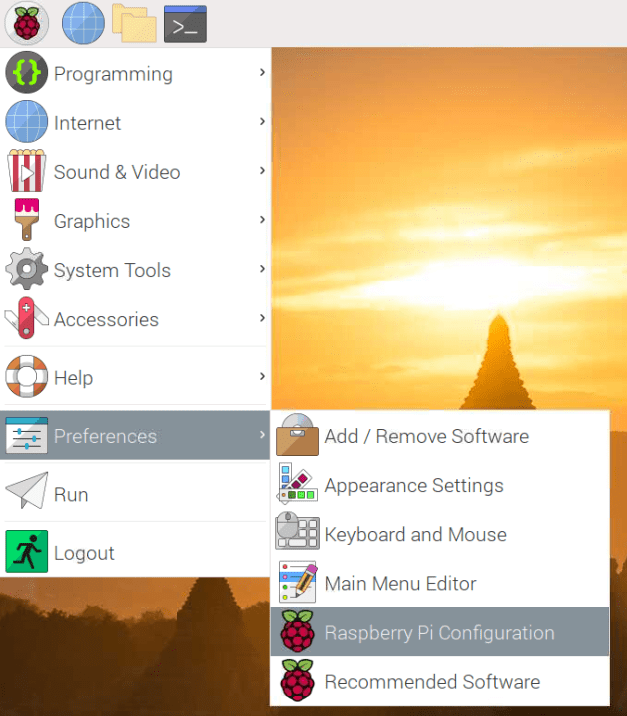 Select the “Interfaces” tab and click on “Enable” next to “Camera:”. 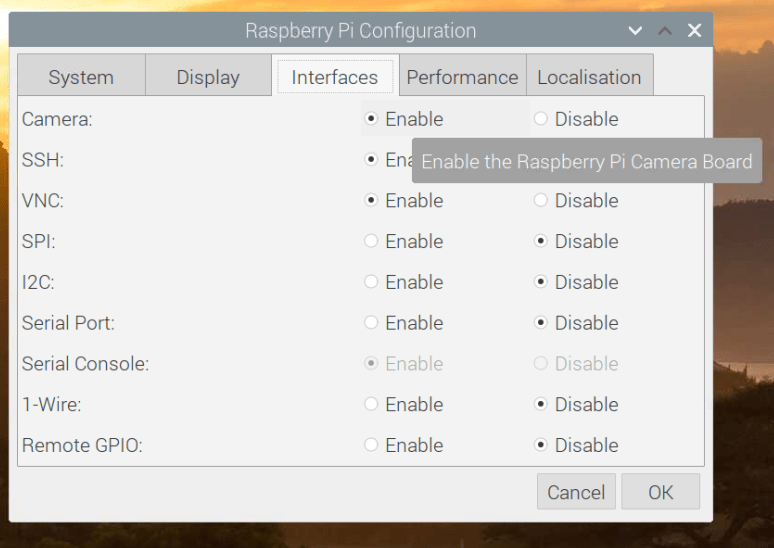 Then, click on OK and reboot your Pi so the change will be effective.

Take a picture with the Raspberry Pi camera

Now that the camera is plugged and enabled, you can start to take pictures. Here we’ll use the raspistill command in the terminal – already installed on the Raspberry Pi OS.

First, open a terminal. If you don’t have the terminal icon on the top bar, click on the Raspberry Pi icon > “Accessories” > “Terminal”.

To take a picture, you’ll need to use the raspistill command and also provide one argument: the name of the file for the output, so raspistill can save the photo into that file.

Let’s give it a try.

This command will take a few seconds to execute, because the camera functionality needs some time for initialization.

After writing raspistill, I have added -o ~/Pictures/first_image.jpg. What does it mean?

Note: if you execute the same command again with the same file name, the previous file will be replaced. So, if you want to keep all pictures you take with the Pi camera, make sure to provide a different file name every time.

You can also provide a relative path to save the picture from where you are in the terminal.

This will also create a new picture file in your “~/Pictures/” directory.

Now that you’ve taken a photo, you might want to actually see that photo. There are 2 main ways of doing that.

First, and this is the easiest way since you’re already in the terminal: use the xdg-open command, which is basically the same thing as double clicking on the file to execute it or open it.

Or, if you’re already in the picture directory:

You should now be able to see the picture you’ve just taken with the Raspberry Pi camera!

The second way to open the picture, is to open a file manager (click on it on the top bar), and use your mouse to find the file + double click on it.

Customize the images you take with the Raspberry Pi camera

Change resolution and flip the picture

When you open an image in the image viewer, the resolution will be displayed on top. For example when I view the picture I see 3280 x 2464, which is quite big. Now let’s say you want to take pictures with a specific resolution: 1280 x 720.

Also, depending on how you placed your camera, you may see that the image is upside down.

It would be quite boring to have to resize and apply changes for all pictures you take.

Instead, you can provide some options with the raspistill command, to directly take pictures with the correct configuration. No need to do any post-processing.

And one more thing: by default the raspistill command will wait for 5 seconds before taking a photo. The camera needs about 2 seconds to initialize, so we could also reduce this timeout.

Let’s try one command to change the resolution, flip the image vertically, and wait 2 seconds instead of 5.

Let’s break this command down:

Here’s a video showing you how to to change the camera resolution for your Pi camera (same as instructions above).

And another one for how to fix the upside/down problem with images.

How to get the complete list of settings for raspistill?

At this point you might wonder: how could you find all those options by yourself, without having to search on the internet?

Well it’s pretty easy. If you just type and execute raspistill, or raspistill --help, you will get the complete list of all available options. As you’ll see the list is quite long.

Apply filters to the Pi camera

With the list of settings for the camera, you can completely customize the output image.

Let’s say you want to change some basic settings such as contrast, brightness, etc.

For example, if you add -co 10 -br 55 -sa -10 after the raspistill command and the other options, you will get an image with:

If you want to add some text on your photo, you can do so with the -a option. For example: -a "Hello from the Pi camera".

And if you want to add complete image effect modes (similar to the modes you have when you take a photo with a phone), you can use the -ifx option, appended to the other options for raspistill.

For example, -ifx cartoon will make the picture look like a cartoon picture.

In this tutorial you have learnt how to setup and use the Raspberry pi camera module. If you use Raspberry Pi OS, there is almost no configuration to do, it just works out of the box.

With the raspistill command line tool, you can get access to all the camera functionalities, directly from the terminal. Execute raspistill alone to get access to the documentation with all the available options.

Now, to go further with the Pi camera, you can: