So, you’re using the digitalWrite() function in most of your Arduino projects. But you may come to a point when this function is too slow, because you have to use it a lot, and with a high frequency. In this tutorial I’ll show you how to make a fast digitalWrite(), so you can speed up your programs.

Before going any further, I want to emphasize this: don’t try to optimize a code too soon, especially if there’s nothing wrong with it.

If your application consists of switching a digital pin every 100 ms, and if you don’t have any real time constraints, then don’t bother optimizing, you’ll just waste your time.

As Donald Knuth said: “Premature optimization is the root of all evil.”

So, be sure you actually need to optimize before you do.

Note that even if you don’t need to optimize your code, reading this tutorial can still be useful to understand a few things about Arduino. Applying the tips on all your Arduino projects though is not something I would recommend. Just use the tips when you really need them.

Why Arduino digitalWrite() is not fast

Optimizing stuff is cool, but if you don’t know what you’re optimizing, and by how much, then there’s no point.

In order to get an accurate measurement, we’ll execute digitalWrite() 1000 times and then divide the result by 1000. It’s often better to take a large sample instead of just measuring only one action.

This code will print the total duration required to execute 1000 digitalWrite(), and then print the average duration for only one digitalWrite(). To get more details and explanations about this code, check out How to compute a duration with Arduino.

So, if you run this code, and open the Serial Monitor, you’ll get something like this (on Arduino Uno):

We have the answer: a digitalWrite() will take 3.40 microseconds to execute on an Arduino Uno board.

Note: here we used micros() to get the time. micros() can only be precise up to 4 microseconds, so that’s another good reason to compute an average, so we can have a much better precision.

3.40 microseconds can be quite a long time to just change one pin’s state.

digitalWrite() behind the hood

The digitalWrite() function does a lot of things. If you want to check the full code, it’s available on Github.

Really quickly, the digitalWrite() will (not necessarily in the code’s order):

That’s a lot of steps for just changing the pin’s state. In the following we’ll basically skip all those steps and directly change the corresponding port to the state we want.

As long as you don’t use PWM on digital pins, using digitalWrite() is kind of overkill. You can skip all the steps without any problem.

Let’s now try to optimize this function so it takes much less time.

Instead of using the digitalWrite() function, we’ll directly manipulate the port to change a pin’s state. 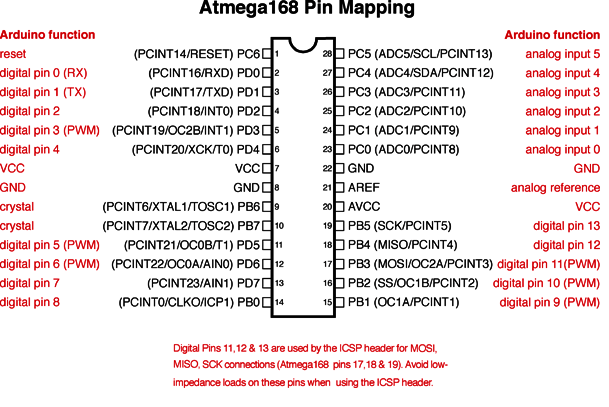 This schematics might look over complicated, but be reassured, it’s not!

For example, if you want to get access to the digital pin 8, then you’ll use port B0.

Basically you have 3 ports:

So, all you need to do for a given digital pin, is to find which port (B, C, D) and which number is associated to that pin. Then, knowing that information, there’s a way to directly change the pin’s state in your Arduino code.

Let’s see how to do that.

We’ll keep the same code as before (using digital pin 8). The only thing we’ll change is the for loop.

How to actually write this code?

First, to change a pin’s state, you have to use “PORT”. You then add the letter corresponding to the port. In this case the port associated to digital pin 8 is B0 so we use B, so it becomes PORTB. For any pin on port C you’ll use PORTC, and for port D you’ll use PORTD.

I’ll give some more explanations a little bit later, for now, let’s see if this makes the digitalWrite functionality faster or not. Here’s the result from the Serial Monitor.

That’s way much faster! From 3.4 µs to 0.19µs. The execution duration has been divided by almost 18.

But maybe you don’t want to set all pins at the same time. Maybe you only want to set one pin’s state. And also, you may not know in which state all the pins from the port are at the present moment.

So, how to deal with that?

Modifying only one pin’s state

You can use this technique to also set multiple pin’s states, while keeping all the other ones to their previous state.

Now, if we apply that to our previous code example with the for loop (digital pin 8):

Here’s the result from the Serial Monitor:

As you can see, it’s a little bit slower when using the OR and AND operators. However, that’s still 13 times faster than the digitalWrite() function.

You should try to use this way to handle direct port manipulation as often as possible. Unless you really know what you’re doing.

Make sure you know what you’re doing

A few words of caution:

Now, don’t be afraid with those words of cautions. Using the fast digitalWrite() with direct port manipulation is a really useful improvement when you need it. Just make sure you know what you’re doing – and if not, get educated about that – and everything will be fine!

Note: using direct port manipulation here is maybe not a great idea, since the application doesn’t require high performances. Using digitalWrite() for such a simple application would be more appropriate. The only reasons why I did this is to show you an example. Now, if you need to increase the frequency, or do many other things at the same time (multitasking), then you might need to optimize your code at some point, and this could come in quite handy.

You can now write a fast digitalWrite() on your Arduino programs. This tutorial also gave you an introduction on manipulating ports directly. As you progress with Arduino, it’s a good practice to try to find what’s behind the hood of the standard Arduino functions. This will give you a better understanding and help you progress faster, especially if you plan on writing code for other micro-controllers in the future.

To go even further with this tutorial you could also optimize the pinMode() function with direct port manipulation, but usually a pin’s mode will stay the same for a long time. So, the trade-off between “having chances to break things” and “getting more speed” is not really good here. Keep using pinMode() in the setup() function, and optimize digitalWrite() if needed.