In this tutorial I will show you how to control your Arduino board using only JavaScript (with Node.js) and the Johnny-Five npm library.

The Johnny-five library will communicate with your Arduino board using the Firmata protocol.

It’s a great way to quickly write code for your Arduino directly from your computer, and integrate it with your other JavaScript applications and libraries.

Setup your Arduino board with StandardFirmata

First you need to upload the StandardFirmata program on Arduino. This is the only step you’ll do on your Arduino board for this tutorial. 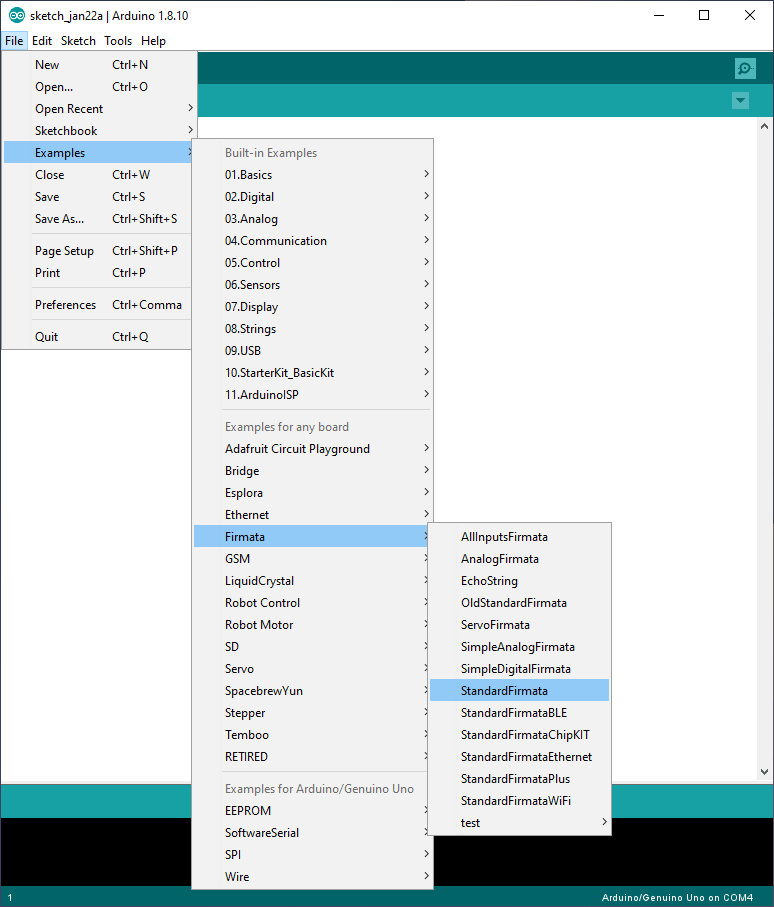 (Check out this StandardFirmata tutorial if you want to know more about Firmata on Arduino.)

Setup Node.js and the Johnny-Five library with npm

The next step is to install the Johnny-Five library.

First make sure you have Node.js and npm running on your computer.

To simply install and use the latest LTS Node.js and npm versions (through nvm):

Then you can check which versions are installed with node --version and npm --version.

You can see which version was installed with npm view johnny-five version.

Control your Arduino with JavaScript (Node.js) and Johnny-Five

As a first example, and to get something running quickly, let’s build the famous Blink LED example.

Create a file (for example “blink_led.js”) and write this code.

Make sure your Arduino board is plugged to your computer with a USB cable.

Execute the script with node blink_led.js. You should see the built-in LED blink every 0.5 second! To stop the execution, press CTRL+C twice.

Note: it can take a few seconds for the connection to be established. You’ll see a log message when the communication is initiated.

First you include the Johnny-Five library.

This line automatically finds your Arduino board and starts a connection. Quite magic right?

It’s very convenient, but if you want to specify the port yourself (for example you have multiple boards connected to your computer), then you can use new five.Board({ port:"YOUR_PORT_HERE" }). You can easily find the port: it’s the name you see inside the Arduino IDE, under “Tools” > “Port”.

This block of code will be executed as soon as the connection with the Arduino board is made. That’s where you can run the code you would write inside void setup() and void loop() in a typical Arduino program.

Johnny-Five contains many useful objects you can use for almost all standard components. Here, instead of specifying you want to use a digital pin and set it to OUTPUT mode, you can simply create a Led object with the pin number. The JavaScript library will know what to do and handle everything under the hood using Firmata.

The blink(duration) method is pretty straightforward: blink(500) will blink the LED every 500 ms.

Let’s create something a little bit more complex. We’ll use a breadboard and some common hardware components here: 1 push button and 4 LEDs.

The goal is to check when the button is released. When it happens we want to power on one LED, while powering off the previous LED. Each time we release the button we switch to the next LED. When the last LED is reached we go back to the first LED. This will make a LED rotation.

This application is the same as the one we used in the pyFirmata tutorial, which allows you to control your Arduino with Python and Firmata.

How to build this circuit:

Make sure you’ve correctly connected all the grounds before you power on your Arduino board (more info on Arduino Uno pinout), by plugging it to your computer.

Run it and press+release the push button after the communication is setup. You’ll see the second LED powered on. Press and release again to change the powered on LED, and so on.

Let’s break down this code step by step.

As we already did before, we import the Johnny-Five library, and start the communication with Arduino. Once done, we execute the code inside this block.

So now we have 4 LEDs and 1 button to create. For the button, you can use the Johnny-Five Button class, with the pin number as a parameter. It will automatically set this pin mode as INPUT.

We also create a LED array containing all 4 LEDs, and create a LED index variable to keep track of which LED was powered on last.

The first action we do is to power off all LEDs. With the LEDs array it becomes very easy.

If you want to compare this code to the “typical” code inside an Arduino program, well all the actions until now is what you’d have done in the void setup() Arduino function, and all the following actions would go inside the void loop() function.

In order to know when the button is released, we can just wait for the “released” event triggered by Johnny-Five. No need to manually check the button’s state.

What we do here is to power off current Led, switch to the next Led, and power it on.

Going further with Johnny-Five and Arduino

There is much, much more stuff you can do with Johnny-Five and the StandardFirmata sketch on Arduino.

You can actuate many components, read data from many sensors, and even use protocols such as I2C to make your Arduino board communicate with other small devices.

You can find the complete Johnny-Five API for all available components here on the library website. Just a quick note: you’ll see they use var everywhere to create variables. Please don’t do that and use let instead, it will save you some hair loss in the future.

Let’s use a single LED, attached to a pin compatible with analog output (for example: pin 9, 10, 11 on Arduino Uno).

If you want to give one specific brightness value to the LED, you can use the brightness(value) function, with value between 0 and 255: for example led.brightness(128);.

If you add a potentiometer you can also use Johnny-Five to get the analog value from the attached pin. Let’s write an example with analog pin A0.

Here you can create a Sensor(pin) object. The Johnny-Five Sensor class is used to read analog sensors.

The value you’ll get – with the “value” property – is a number between 0 and 1023. This is the raw data from Arduino. You can use methods like scaleTo(min int, max int) or fscaleTo(min float, max float) to change the range of the read value.

If you want to practice more from there, you can combine the 2 previous examples together: change the brightness of the LED depending on the potentiometer value. You can see here that scaleTo(0, 255) will become quite useful.

Conclusion: save time with Arduino and JavaScript

In this tutorial you have seen how to run Arduino programs directly from your computer with the Johnny-Five JavaScript library, using the Firmata protocol.

This setup can save you a lot of time if you want to test programs quickly. You don’t need to write any code on Arduino and you don’t need to handle the Serial communication between your computer and the board. Also, Johnny-Five brings a lot of useful abstractions which will reduce your code even more.

However, note that if your application requires advanced Arduino programming, or high performances, you might become limited with Johnny-Five and Firmata. You’ll see as you make progress!