You will learn how to dynamically make the LED fade in/fade out when you turn the potentiometer knob.

And let’s get started!

Arduino circuit with LED and potentiometer

Let’s first build the circuit. You will need those components:

Here is the circuit. 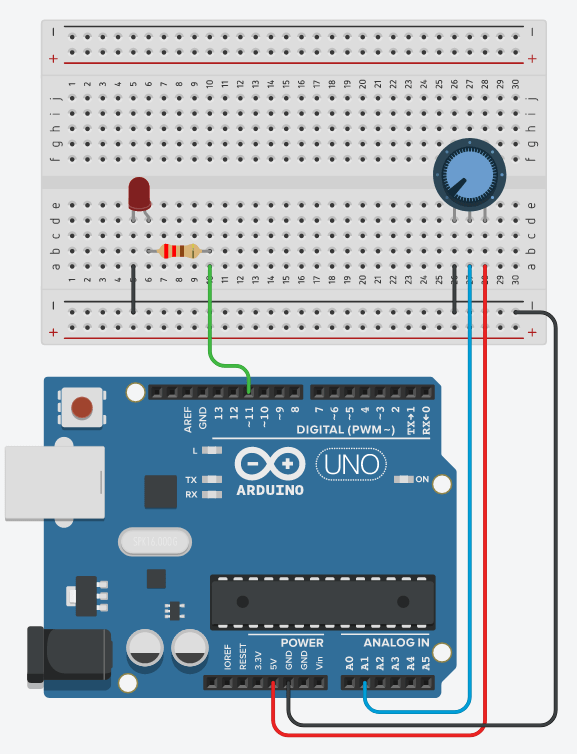 Steps to build the circuit:

Arduino code to control LED brightness with the potentiometer

In this application, what we want to do is simple: when we turn the knob up (for example turning clockwise), we want the LED brightness to increase.

Here is the code to do that.

Let’s break down the code line by line.

We start by a best practice, which is to create some defines (you could also create some const int variables) for the pins we are going to use in the program.

One for the LED pin, one for the potentiometer. This way, we can modify the circuit at any moment, all we’ll need to do in the code is to modify those 2 lines.

In the void setup(), we need to initialize the mode for the pins we want to use:

Now that everything is setup, we can start to control the brightness of the LED with what we read from the potentiometer.

We enter the void loop(), and the first thing we do is to read the potentiometer value.

To do that we use the analogRead() function, which takes one parameter: the pin number to read from. We store the value inside an integer variable. This value will be in the range 0-1023. In other words, this is a 10 bit number: 2^10 = 1024.

So, before we use this function, we need to make sure the value is in the correct range. And as I really like simplicity, you can see that, roughly, 1024 is 255 multiplied by 4 (not exactly this value but this is a good enough approximate for what we need to do). So, if we want to put a value from the range 0-1023 to the range 0-255, we can just divide by 4.

Nothing fancy here, it’s very simple and it works.

To do the same thing, you could also use the Arduino map() function which can put a number into a different range.

With this line and the 5 arguments in the function, what we’re saying is: take the potentiometerValue from the range 0-1023, to the range 0-255.

Using map() is great whenever you need to do operations like this, and it works for any integer range.

So now we have computed the brightness to apply to the LED. This brightness variable is an integer number between 0 and 255. Exactly what we need for the analogWrite() function.

analogWrite() takes 2 arguments: the pin to apply the voltage to, and then a byte number between 0-255.

Note: this is only going to work on PWM compatible pins. So if you see that the LED is just fully powered off/on when you run this program, this is probably because the digital pin you’ve chosen is not PWM compatible.

In this tutorial you’ve learnt how to control an LED brightness with a potentiometer, using Arduino.

In the end, here’s a summary of what you need to do in the code:

To go further from here, check out those tutorials: