WiringPi is a Cpp library for Raspberry Pi. With this library you can use many of the functionalities provided by the GPIO header: digital pins, SPI, I2C, UART, etc.

Although there are many Python libraries for Raspberry Pi GPIOs, Cpp is quite a bit behind. Fortunately, there is WiringPi.

In this post you’ll install WiringPi, get to know how to use it, and see many practical points which will be useful when you work with this library on your own projects.

After this overview and starting guide, you’ll find many other WiringPi tutorials:

!! Note: wiringPi is not supported anymore by its initial author, however there is a fork on GitHub where the open source community is continuing to provide support updates. WiringPi should still work fine for you (with Raspberry Pi 3-4).

This step will depend on the operating system you’ve installed on your Raspberry Pi.

You can find out easily:

If you have a Raspberry Pi 4 board, the “Raspberry Pi Details” section will be a little bit different, but the functionalities of WiringPi remain the same.

Raspbian is the officially supported OS for Raspberry Pi, but there are many other Linux OSes adapted for the Pi, for example Ubuntu Mate.

If you have a non-Raspbian OS you’ll need to install WiringPi from source, through the following steps.

Executing those command lines will get the source code from git, fetch the latest update, and build WiringPi.

Once you’ve executed all the steps, check if WiringPi is correctly installed with gpio -v.

Upgrade for Raspberry Pi 4B

If you’re using Raspberry Pi 4B, the following gpio readall command might not work for you. You have to upgrade the library from version 2.50 to 2.52.

To do that, just run the following commands.

Make sure WiringPi is correctly installed by running gpio -v.

Now, in order to use WiringPi in your Cpp code you need to know 2 things:

Check all pins on the Raspberry Pi with WiringPi

WiringPi is not only a Cpp library. It contains some useful command line utilities to help you see the state of your GPIOs and do some debugging.

Before diving into the code, let’s check what pins you can use.

With gpio readall, you can get a complete overview of all available pins on your Pi board. We’ll also see later in this post how to use other functions of the WiringPi gpio command line tool. 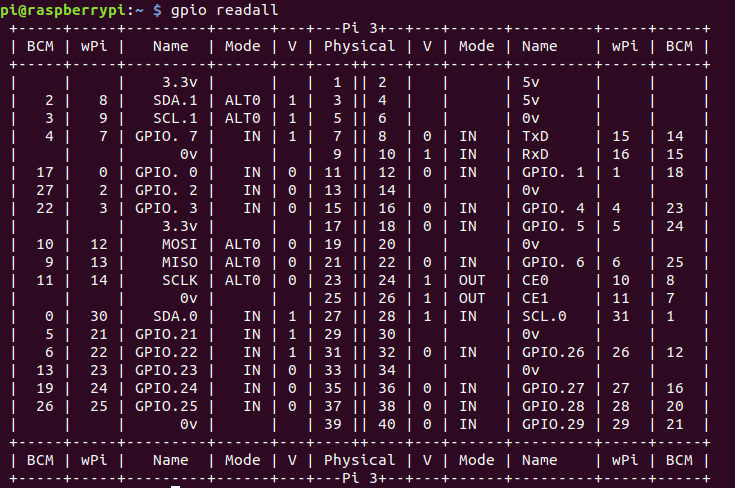 The table you see with gpio readall is quite complete, it gives you a lot of useful information. The table is separated into 2 parts, which are mirrored, exactly as the Raspberry Pi pinout overview on the second image.

gpio readall: what does each column mean?

Here are some explanations for each column from this table:

To recap, this table can help you get a quick overview of all pins, what number to use for each pin, and the current mode/state for a given pin.

As a general rule, prefer using the BCM numbering convention over the WiringPi convention. This will be easier for you to be in sync with other developers, and if you switch to another library (for example RPi.GPIO with Python), you will be able to use the same pin numbers.

A simple code example with WiringPi

In this example we’ll manage a LED and a push button using the Raspberry Pi GPIO header.

The goal of the program is to use WiringPi to read the data from the push button (digital input) and power the LED on (digital output) when the button is pressed.

We’ll use the core functions from the WiringPi library, and if you’re familiar with Arduino, you’ll see that those functions are almost the same!

The pin numbers inside WiringPi code follow the BCM pin numbering, so, use the “BCM” column from the previous table in order to find the correct number to use.

The LED is connected to BCM pin 17, which is also WiringPi pin 0, and physical pin number 11.

The push button is connected to BCM pin 18, which is also WiringPi pin 1, and physical pin number 12.

Let’s keep things simple and use only the BCM pin number convention (GPIO 17 and GPIO 18) for the rest of this tutorial.

A few important things to consider when using the Raspberry Pi GPIOs:

Let’s compile the Cpp code to create an executable – and don’t forget to link to the WiringPi library!

Here’s the kind of error you’ll get if you don’t link to WiringPi:

Let’s know break down the code line by line.

The first thing to do is to include the WiringPi library with the <wiringPi.h> header.

Using #define to set pin numbers is a good practice, also often used when writing Arduino programs. You can set all your pins at the top of your program and then it becomes very easy to modify your code if you physically change a pin location.

All your programs using WiringPi need to call a setup function at the beginning. Here, as we are using basic GPIOs, you can just call the wiringPiSetupGPio() function. Make sure it’s always at the top of your program, and make sure you only call it once!

If you’ve already programmed on Arduino, you should feel very familiar with those 2 lines. If not, well that’s quite simple: before using a pin, we need to setup its mode. We set the LED pin as an OUTPUT pin, so we’ll be able to send a value to it. And we set the button pin as an INPUT pin, because we want to read a value from it.

The WiringPi library contains some useful #defines, such as INPUT, OUTPUT, HIGH, LOW. Always prefer using them in your code, instead of just 0 and 1.

This code is pretty straightforward. We read the value from the button with the digitalRead() function. This value is either HIGH or LOW (1 or 0).

Finally, we make the program sleep for 10 milliseconds between each iteration of the loop, so we don’t use too much CPU.

The gpio command line tool is quite useful to test your GPIOs quickly, directly from the terminal, without having to: 1. Write a Cpp code, 2. Compile it, and 3. Launch it.

In fact, you’ve already saw 2 functions: gpio -v gives you the current WiringPi version and some info about your Pi, and gpio readall prints a complete overview of all the pins on the GPIO header.

Let’s see a few other basic functions here. Keep the hardware setup you’ve made with the previous code example, we’ll use it to check that the commands we write are correctly working!

For all functions, we’ll need to give the number of the pin we want to use. As you saw before in this post, there are 3 different numbers for each pin: physical, wiringPi, and BCM. When writing Cpp code, the numbering convention is the BCM one. But when using gpio on a terminal, the convention is the WiringPi one, which can become quite confusing.

Fortunately there is a flag you add to use the BCM convention: gpio -g .... That’s what I recommend you to do in order to keep things simple.

Use gpio mode to change the mode of a pin. Note: this is quite obvious but GND and power (3.3V, 5V) pins can’t be changed and used for anything else than GND and power supply.

To set the LED pin (GPIO 17) as an OUTPUT pin, use gpio -g mode 17 out. If you run gpio readall again, you’ll see that the pin mode has now changed.

To set the button pin (GPIO 18) as INPUT, use gpio -g mode 18 in. Basically this pin should already be in INPUT mode when you boot the Pi, but it’s always better to setup a pin before using it, as another program may have changed it just before.

Use gpio read to read the state of a pin which has been set as INPUT. The printed result will be either 0 or 1 (LOW or HIGH).

Here, after you’ve set the pin mode for the button, just run the command.

Now, press the button, and run the command again (while pressing).

Use gpio write to set the state of a pin which has been set as OUTPUT. For the state parameter, write 0 for LOW and 1 for HIGH.

In this post you have discovered what is WiringPi and how to control your Raspberry Pi GPIO header with it.

You can now easily install the WiringPi library, find information about a given pin on the terminal, and write a complete Cpp code to control digital pins.

This is a great step you’ve made, but there is still a lot more to learn!

The best way to learn is to find yourself a personal project. Choose a project that involves using different kinds of basic and complex sensors, and why not communicating with an Arduino board through the GPIO header.

Here is a list of tutorials you can use to expand your knowledge and practice with WiringPi: